(THE ART OF MAKING SPOONS) 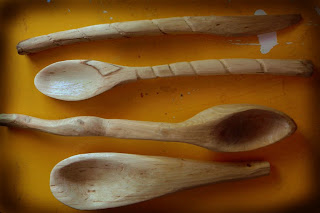 Without doubt a rather useful utensil to have when out in the wilds and there is something very fulfilling about having made your own for use. A variety of styles can be mastered quite easily with few tools.

For making a spoon I tend to simply use my folding saw if harvesting the green wood myself, my trusty bushcrafting knife and, in this case, a crook knife (A knife with a curved blade made particularly for the purpose of carving out hollows and bowls. 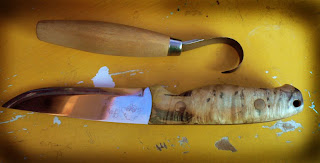 The two main tools to be used in spoon making, the crook knife at the top and a trusty bushcraft knife below.

The first step in making a spoon is to select your wood and harvest it green from the tree whilst doing minimal damage to the tree itself. Ideally wood used should be wood that is NON-TOXIC (avoid the likes of elder, yew and holly though there is some controversy over whether or not these woods may actually be used) as it will be in contact with food and mouth, ideally it should be wood that is quite easy to carve such as most fruiting tree woods or the likes of sycamore or birch (which initially has antibacterial properties) though you may wish to go for aesthetics (birch for example is a beautiful wood) or may have limited resource. Woods that are high in tannins are also good as they are more water-resistant and less prone to rotting. The wood you choose merely makes your job easier and I have managed to carve spoons from seasoned oak though it was very difficult to do so.

When collecting the wood you may wish to use wood from a recently felled tree or cut it from the tree itself, minimal damage to the tree is to me a more important goal than the perfect spoon. Some like to use a branch with a natural dogleg to incorporate the shape of the handle but you can quite easily make a spoon from a straight piece.

The first cut is made from the underside of the branch and we cut in until we feel the saw bite, it is wise to cut about a hands width from the tree in the first cut.
The second cut is made on the upper side about 2 inches towards the tree from the first cut. This method is called a step cut. At some point the wood will split between the two cuts creating a “step”
The third cut is to smooth of the severed limb at an angle to allow water to shed and the tree limb to heal. 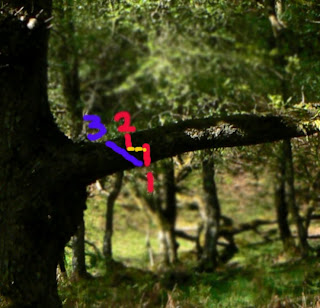 Sequence of cuts when removing a limb from a tree

Now we must cut the branch to a good-sized shape for a spoon, this will depend upon what sort of spoon you make, a mixing spoon or a teaspoon and everything in between is possible. A piece of birch wood cut roughly to the desired size for making a large desert spoon. The wood had a crack that had to be taken into consideration when splitting the wood

Once the wood is cut, roughly, to the desired size then it is to be split. The wood can be split with an axe or with a knife and baton. Safety is always important and should always be a priority when woodworking. 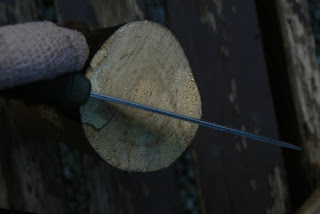 When splitting wood with a knife and baton always make sure the knife parallels your body so that if it passes through the wood unexpectedly it will not cut into your body. 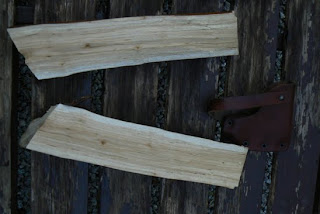 Wood may also be split using an axe if confidant, always chop in a safe manner and be aware of where the axe is at all times
Assess the wood for damage, rot, grain pattern, knots and so on and choose which halve to make your spoon from. Some people like to draw out a spoon shape at this stage and it is a wise idea when starting out. 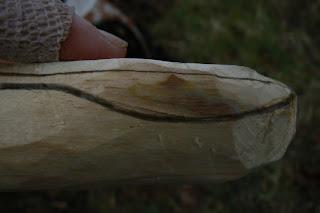 There was a crack towards the bowl end of the wood which had to be avoided so I chose to draw out the spoons bowl on the side here.
The meat of the wood then has to be removed and the spoon shaped knocked out and this can be done using stop cuts. Remove wood up to the bowl and along the handle.

Here you can see the spoon shape marked out and some stop cuts have been sawn in to the wood. These are these knocked out using a knife and baton technique similar to splitting wood. 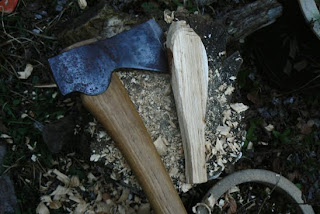 Some like to use an axe to heft out the general shape of the spoon but if inexperienced with an axe a knife is far safer and can be as quick.

The bowl shape of the spoon can then start to be carved into the rough shape and the back of the spoon reduced. Some people, myself included, may wish to do these steps with an axe though for safety sake it is probably worthwhile using a knife.

The spoon should roughly be shaped now and the bowl ready to be carved and this can be done using a crook knife.

BE VERY CAREFULL using a crook knife as they can cut quite nastily so generally always cut away from yourself as you should with any knife, I have heard nasty stories of crook knives imbedded in fingers.

Hopefully now having carved out the bowl of the spoon you have the desired shape and all that needs done now is to sand the spoon (I have found sandpaper made for electric sanders better than ordinary sheets as it is less prone to breaking up and tearing) as desired and possibly oil or use beeswax to finish the effect. You may wish to add some extra detailing. 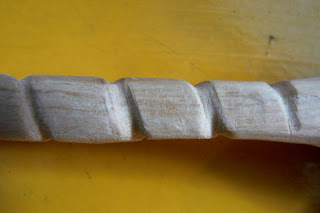 Here I decided to add some extra detailing along the handle of the spoon using my knife carefully.

If all else fails and the spoon is beyond saving then one can always improvise and turn such an item into a butter knife or at the minimum a toothpick or some nice firewood.

A completed large desert spoon made from birch wood ready to be used and I was very happy that I managed to carve this one single handed!
Posted by Night Phoenix at Friday, April 30, 2010