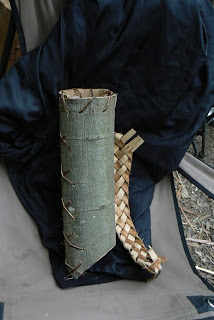 Bark has been employed throughout history for many different uses from sustenance and medicinal values to properties useful in craft.
Bark has been used throughout history for everything from Canoes to flasks and all containers in between. Bark containers can be made, with the right materials, waterproof and this combined with their lightness and decent durability make them a very worthwhile piece of equipment to have at hand for varying tasks.
It is also possible to make a bark container using no modern materials or tools, only what you find, employing flint for cutting and drilling and shells and stones for marking. For the benefit of this tutorial, however, I am going to show how to make a bark container using a knife.
The first most obvious step is to collect the bark for the container, it is important however that it is taken from the right species of tree, many species will not give there bark so freely.

The most obvious species of tree to use when making a bark bag or container is probably the birch tree (Betula sp.) but I have found that in this country the bark is much to thin to be of use and is prone to splitting at the lenticels making it fiddly business trying to get it off the tree. I have however seen some incredible pieces made from birch bark in Siberia where the bark grows thicker on the trees. If using birch however it is the outer bark that is used.

Species of trees that offer good bark are for example sweet chestnut (both the inner and outer bark may be used) as well as: Juniper, Aspen, Cherry, Willow, Cedars, Lime, Oak, Chestnut, Elm and a species which I am experimenting with at the moment is Rowan.

The other important factor when collecting bark is the time of year, it should generally be springtime (though I have heard of birch bark being collected in winter to gain a darker colour but this is difficult to do) and the bark should come from a living or very recently felled tree.

Once the tree has been selected it is important not to strip the tree completely of its bark nor take bark off in a complete ring round the tree, as this will kill the tree. I however only take my bark from trees that need to come down or recently felled as taking bark can damage or threaten a tree fairly significantly. I have also taken bark from limbs of trees before but this is generally thinner than from the main trunk, if doing so, I will take the entire limb and using it for other crafts.

The next step is to remove the bark. To do so mark the top and bottom of the section you wish to take with a knife or axe to give a clear guide. If cut through the bark to, but not into, the wood of the tree then this will help when removing the sheet of bark.

Then a line is drawn down the bark with a knife connecting the two markers. Work the knife slowly under the lip of the bark, between the wood and bark, down the length of the sheet until an edge is separated, depending on which type of bark is used it is sometimes then possible to work of the bark with fingers and wooden wedges. 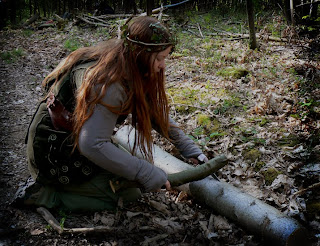 When removing the bark score the length of the sheet with a knife and here I used a baton to help the knife cut into the bark. 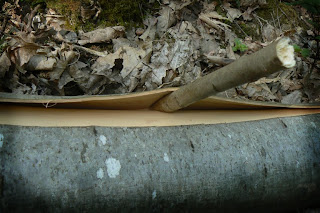 Once the bark has started to separate from the wood then it is possible to work the sheet of by hand. Here I employed the use of a peg to help me work the bark off. It was surprisingly easy.

Once the sheet has been removed completely from the wood it should then be made to lay flat to prevent it from curling which is what it will instantly wish to do. 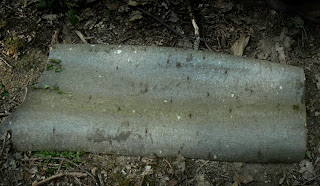 The bark should be laid flat to prevent it from curling before use.
Next the pattern for folding the container should be marked out. It important when marking out the pattern that it be marked on the outside of the bark and done so with a knife or flint and not something such as a pencil as a pencil can actually raise the outer bark from the inner slightly and cause a bit of trouble.
Here we are making a simple folded bark container that will sit comfortably on the knee.
This is the shape which we must mark is as follows in the diagram.

This is an important bit and wedge shapes must be cut out at the corners to allow the bark to fold in on itself easy enough. The triangles should be cut at 90 degrees roughly; start of with small cuts and then enlarge to be on the safe side. If the bark splits it can be sealed later on with pitch or may come together when tying the sides.

If the bark is not folding along the score lines easily enough then score deeper but do not cut all the way through, we want the bark to bend not break! 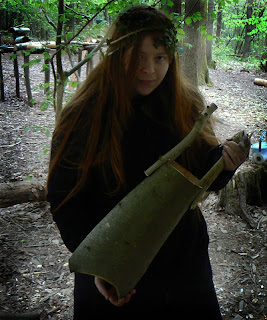 Once the bark has been folded to shape the sides can then be held with stick pegs whilst the container dries slightly into shape.

Once the container is folded into shape it can be pegged to hold its shape and left to dry. At this point I then moved on to do some bark weaving to make a handle for the container.

To weave bark we must remove the outer bark first, this is best done whilst the bark is still attached to the wood and is easily removed with a blunt object like the back of a folding saw. 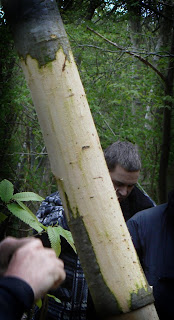 For weaving the inner bark must be cut into strips, the thinner the strips the more tight the weave may be. To cut the strips equally you could use strong scissors or a nice little trick using involving a knife in a stump and a peg for a guide as shown here: 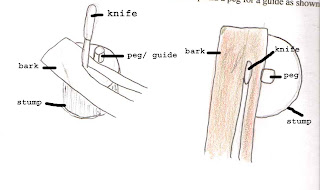 To make weaving easier improvise a grip from a split stick tied together as shown in the image. 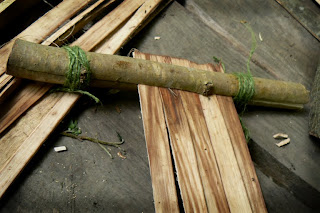 The pattern of the weave is important and is as follows. In the diagram below… 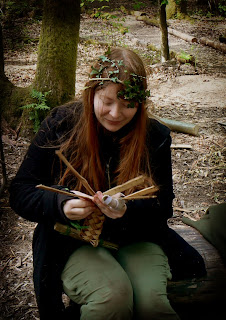 Weaving can be fiddly business but is quite addictive once used to the way of it. 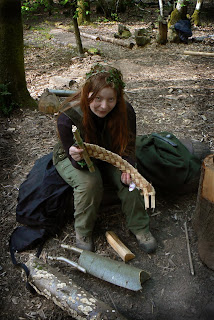 A completed weaving ready for use and attachment 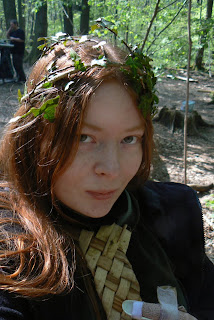 The weaving could also make a wilderness tie!

When the weaving is complete the ends must be folded back in on themselves.

After a couple of hours the container should have dried out a little and is ready for stitching. To do so I used very thin strips of bark as the equivalent of the thread. When stitching it is important to make sure the holes or punctures are NOT in alignment vertically as this will encourage the bark to split, which is something that really should be avoided.

Stitch from the bottom up wrapping around the base of the container and finishing at the rim.

To help the bark keep its shape add a circle of wood in the top, here I used a piece of western red cedar bark that was already roughly bent to shape and secured it with further bark stitching.

This should complete the basic bark container, a handle may be added and designs if so wished. 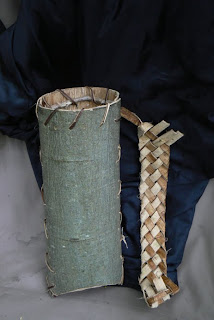 The finished container and weaving
Posted by Night Phoenix at Friday, May 28, 2010